The name of the young person is Orpheus( a pseudonym). He was 24 years old until a few weeks ago (April 2019), when his body was found on one of the beaches of Attica, near Athens. His relatives and the police were searching for him for 2 days. He had been going through another psychological crisis, the confusion of an inner desolation, the psychotic fear of personal persecution and the fragmentation of his identity as a living human being.
I know Orpheus since he was a baby, as well as his older brother. I became friends with their parents before the children were born, when I was living in London , doing my Ph.D. between 1983 and 1986.

For many years, I had predicted that Orpheus would eventually commit suicide, because he was a very sensitive and quiet person, with the physical appearance of a tall slim pale angel who from the start of his existence had been living with two ‘’immoral’’ and ‘’sinister’’ parents. They wanted him a broken and passive individual, a pretty toy to play with, who would shield them from their distorted phantasies, their sick fixation on wealth and their own childhood nightmares. They were eating the flesh of their children so that they wouldn’t consume their own, exactly like the primitive Neanderthals. This is a common social stigma in most Greek families, beginning with my own Greek family, the families of my Greek relatives, and those of my Greek friends and Greek acquaintances.

As I have already mentioned, Orpheus has an older brother , about 4 years older, who has also been dismembered by his parents, but who is not as sensitive and independent as his younger brother. He has the personality which can withstand the psychological intimidation and attacks of his parents, their mental and physical abuse, as well as their sadistic practices. The brother of Orpheus has learned through experience to concern himself exclusively with his own person and his proper needs, playing along with the ‘’schizophrenic theatre’’ of his parents in order to survive, since he is financially dependent on them. His parents are the ones who provide him with the material benefits for him to enjoy an affluent and carefree existence exactly like his parents, who control great wealth inherited from grandparents.

Orpheus, a more balanced and proud person than his brother, has always been silent and apathetic towards all these maligned and sadistic games of his parents, a mental defence strategy which in the end did not succeed because there was so much human ugliness within his family environment. There was so much psychological and material dependence on his persecutors, his parents, that finally his spirit could not cope and his mind did not have those mental capacities to repel in a systematic way the dark void which encompassed his family. So naturally, Orpheus being more courageous, honest and moral than his brother, chose to leave this world, which did not respect him as a human being and did not respect the sanctity of life!!!
Before I give my final perspective of the larger picture of the social obscenity and the social immorality which stigmatize most Greek families (with focus their young children), I would like to mention some articles that I have written in my website during the last 10 years with main subject the tragic conditions which the young Greek people are living under within a ‘’supposedly’’ moral, liberal and Christian Greek society. Some of these articles are the following:

I wrote these articles for two main reasons.

The first reason is that I personally in my life had to face and still face today at 69, great hostility from my Greek family, from my Greek friends and acquaintances, and from my Greek social environment, because since an early age I chose to live freely , complying to my own personality, my human nature and to the respect I have for life itself and not of society.

The second reason is the fact that for 40 years, in my professional undertakings, I also worked as a teacher to young people in tutorial schools and in private tutoring. I experienced on a personal level and closely, the enormous existential obstacles of young people who wanted to live freely and creatively their lives based on their natural human needs, and their special talents and attributes. Obstacles imposed under the tyrannical and distorted whims of their parents, within all aspects of their proper lives. These young people from a very young age , had to cope with the enormity of the psychological pressures of their parents which were nevertheless shielded with a ‘’social correctness’’. Outdated conservative social traditions and unnatural societal roles which were based on egocentric and narcissistic social priorities of societal status due to personal existential insecurities and incestuous family relationships of personal dependency and mutual extermination!!!

The essence of personal devotion in the everyday existence of most Greeks is their ‘’own little selves’’, as well as their material possessions, which they have acquired legally or otherwise- they can stuff it in their ‘’tight little butts’’!!! Going now beyond their ‘’pretty little hides’’, in their lives there is the ‘’theatrical empathy’’ and not love towards their own children, their life partners, and finally towards their ‘’close’’ friends and relatives. All of these people are absolutely essential human components in their everyday lives, as shields from their own existential insecurities, their own guilt feelings, their disgust of themselves, and naturally their own social image and social status, which objectively equate to nothing. They really aspire to be dynamic societal predators and materially successful, but always socially untouchable and secure!!!

I therefore believe that the time has come to put some real quality and real integrity in our lives, in Greek lives, respecting the freedoms of others, especially the freedoms of the young Greek peoples. We Greeks have to stop being so cowardly and hypocritical , and put some real happiness in our lives, not the ‘’virtual happiness’’ we feel when we acquire wealth and power, or in traditional religious and patriotic ceremonies, and especially when we gorge ourselves with food in festive social occasions. What I am talking about is the spontaneous happiness which one feels because they are alive and can experience the magic adventure of life itself, like young children before their souls and minds have been mutilated by immoral and warped adults. 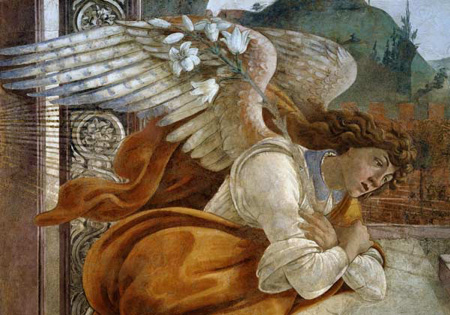 An Angel painted by the Italian artist Sandro Botticelli (1445-1510)

The Greek crisis of 2012 -a ploy by foreign financial and political interests, supported by the human predators of the Greek Establishment. (Part B)

The subconscious never lies. (Dedicated to my friends, Phedros and Christos)

A letter to a good friend (Part D)

A letter to a good friend (Part C)

Personal Comments and Impressions!!! (B)

Why is the disappearance of the “Neanderthal” Man 30,000 years ago, significant today? (Part F)

The crisis of 2012 – a ploy by foreign financial and political interests, supported by the human predators of the Greek Establishment. (Epilogue b1)

Teenage Addiction to “chat sites” on the Internet

The Greek Parliamentary Elections of 2009; a mirror-image of the present “Political Culture” of the country (Part C)