As we have mentioned already in the previous part of our article on Aristotle Onassis, his only son, Alexander Onassis, a few months before his death due to an airplane “accident” which occurred at the international airport of Athens, had announced “officially” to his father that he would soon be leaving Olympic Airlines and that he would be marrying Fiona Thyssen, “shacking” up together in the new house they had bought in Western Europe. Alexander Onassis wanted desperately to rid himself of his father’s “unbearable” psychological pressures and manipulations, discovering an “antidote” in the real love relationship he had created with the rich, dynamic and liberated Fiona Thyssen, who was 16 years olde r(p.1.http://www.men.gr/58/onasis/index8.htm).

During the last year before his death, Alexander had had many serious confrontations with his father related to matters which involved their work relations with the employees of Olympic Airlines, but also with everyday practical everyday affairs dealing with Alexander’s personal safety but also with the “physical safety” of the whole family of Aristotle Onassis. For example, Alexander Onassis during the last few years before his “tragic death”, had been trying to convince his father to buy a helicopter for the travel movements of members of his family within Greek territory, since Aristotle kept insisting that they use an old “Piaggio” airplane similar to the one which later killed Alexander. This was the “fixed” position of a man(Neanderthal) who had in his service the most modern transport airplanes to move the customers of Olympic Airlines to the “four corners of the World”. Alexander couldn’t personally cope “anymore” with his father’s “one-dimensional”, “wretched” and “dictatorial” attitude towards his employees but also towards his own family “…It weighed heavy on him how Onassis ran things. ‘Thank God at least he finally decided to sell off this “run down” Piaggio and replace it with a helicopter for our movements'(Alexander had said then)…”(trans. from greek) (p.1.http://www.men.gr/58/onasis/index8.htm).

Alexander Onassis died on Monday, January 22, 1973, when the airplane which he was piloting, an amphibious “Piaggio 136”, crashed at the international airport of Athens, a few seconds after taking off. We will therefore examine all the facts which are “directly” related to the “accident”; an “accident” which took away the life of Alexander when he was only 25 years old, at the start of his “own life adventure”!!! We shall especially focus on all of the “official” omissions(virtual reality) relative to the real events and the real facts of that specific period, and who finally “benefited” from the distortion of “objective truth” and the “final conclusion” of a young man’s life who wanted to live “freely”, “erotically”, “creatively” and “humanely”, and not live “passively” and “miserably” as most young Greek men and women do live today!!!

Let us begin with an “official statement” made by the airplane mechanic who was directly responsible for the proper maintenance of the Piaggio on which Alexander was fatally injured, Nicolaos Pronoitis, to the reputable greek newspaper “To Vima”, on January 1999, almost 27 years after the airplane “accident”. Nicolaos Pronoitis was at that time about 26 years old, and after almost 27 years he confessed the following”…”I have lived all these years with the nightmare of this event. Colleagues of mine would often tell me ‘come on now Nicola-all of you together wasted the life of that young boy, and I couldn’t say a word” he emphasizes…He was the last person that Alexander spoke to…”(trans. from greek)(p.5.http://www.tovima.gr/default.asp?pid). Nicolaos Pronoitis was the last person with whom Alexander Onassis had spoken just before getting on the Piaggio airplane, but more critically, he personally conducted his own investigation then, whose findings fully contested all of the “official conclusions” which had been approved and released to the public by various “reliable technical experts” and “official committees”, and of course by the high courts of the Greek state. All these details we shall examine later on in our text.

First of all, we should mention that the Piaggio airplane took off at 3 p.m. from the Athens airport on Tuesday, January 23, 1973. The pilot was Alexander Onassis, with copilots two very experienced American pilots, Donald McGregor who often flew with Alexander as permanent pilot of Olympic Airlines and Donald McCasker who was to replace McGregor because the last one had heart problems and could not renew his health certificate which had expired in 1972 (p.2.http://www.tovima.gr/default.asp?pid). For american pilot McCasker it was to be a trial flight with this particular Piaggio, while his flight trainers would be Donald McGregor but also Alexander Onassis. The final destination of this trial flight was the island of “Scorpios”, the private island of Aristotle Onassis in the Ionian Sea.

At 7 o’clock in the afternoon on Tuesday, January 23 1973, Alexander Onassis would leave forever this “insane world” at the hospital KAT of Athens(main state hospital for severe injuries), while at first , he was transported to the hospital of the American military base which was located next to the international airport of Athens (p.3.http://www.tovima.gr/default.asp?pid). The forensic diagnosis as to the cause of death of Alexander was “serious cranial-cerebral injuries” which he had incurred during the airplane accident, while “by miracle”, the two experienced American pilots who were with and close to Alexander, suffered only a “few mild fractures”(p.3.http://www.tovima.gr/default.asp?pid). How could this have happened??? Nevertheless, as it concerns the causes of the airplane accident, there was “surprisingly” almost a total consensus in the findings of the three “legal” and “reputable” consultant bodies representing vital and critical technical know how related to “aeronautics”. These were the Committee for Accident Investigation of Greece’s Civil Aviation, the Committee for Flight Security of Greece’s Military Aviation and finally there was a detailed evaluation of the British aeronautics expert Adam Hunter, who was assigned by Aristotle Onassis as an “independent” but “experienced” technical expert on airplane construction and the various proper functions of an airplane, any airplane. In brief the findings made the following conclusions”…There was an abnormality to the normal functions of the airplane’s steering gears, which was caused by reversing the connecting wires to these steering gears(external wires because of the old construction of this particular amphibian airplane). Other direct causes which contributed to the accident were the improper upkeep and inspection carried out by those responsible for maintenance services as well as negligence by the pilot (Alexander Onassis) to detect the reverse placing of the connecting wires to the steering gears before flight inspection(trans. from greek) (p.3.http://www.tovima.gr/default.asp?pid). This brief technical evaluation of the airplane accident not only establishes “concrete evidence” of professional negligence on the part of the technical staff and of the technical inspectors of Olympic Airlines and the Civil Aviation Authorities of the Greek State, but more importantly it compiles a set of “circumstantial evidence” which points to a “possible” but “deliberate” technical tampering (sabotage) with this particular Piaggio airplane by “unknown persons” whose motive was the “elimination” of Alexander Onassis. Later on, we shall see that this “common consensus” concerning these findings by so many “legitimate” and “legal” technical experts was not “objective reality” but only an accommodating “virtual reality”. So in the final analysis, who were the “persons” who could have benefited from this “concocted description” of the airplane “accident” which killed Alexander Onassis at “the start of his life”???

We will begin with the information which made the headlines of newspapers at that time, and slowly we shall move on to the substance of this whole “tragic affair” which has rarely if ever been discussed or analyzed by the various media, whether in Greece or abroad. Here we have to mention the fact that when Alexander Onassis “died”, his father had publicly maintained that his son had been murdered and that he would pay the sum of 1,000,000 american dollars(at the time) to anyone who would reveal the name or names of the real culprits(p.1.www.sansimera.gr/archive/biographies/show.php?id). At the time, there were many public speculations(virtual reality) about who could possibly be the “conspirator” or “conspirators” behind the “murder” of Alexander Onassis, and some of the names which were “thrown on the table” were the CIA, the brother-in-law of Aristotle Onassis and his main business competitor, Stavros Niarchos, the then military government of Greece, as well as employees of Olympic Airlines(p.2.www.sansimera.gr/archive/biographies/show.php?id). Even though Aristotle Onassis supported publicly that his son had been murdered while also offering a reward of 1,000,000 american dollars to anyone who would reveal the real identity or identities of the “instigators”, he never introduced any “new evidence” and he never mentioned the true motives of the “real conspirators”(p.1.http://www.tovima.gr/default.asp?id).

Now, as it concerns the “real airplane accident”, 7 technicians of Olympic Airlines who were accused of “professional negligence” were declared “absolutely innocent” by the three member magistrate court of Athens on the 7th of November 1977, and soon we will better understand why this court decision is “the key” to this whole “tragic affair”!!! Now concerning Alexander’s two american copilots in the Piaggio airplane who survived “miraculously” with only a few minor injuries, Donald McGregor received 15,000 american dollars as compensation from Olympic Airlines, while Aristotle Onassis forbid his lawyers to grant any money indemnity to Donald McCasker(p.1.http://www.men.gr/58/onasis/index8.htm).

The strange thing about the case of the american pilot Donald McCasker was the fact that he in the beginning, had put his own lawyers to confiscate one of the airplanes of Olympic Airlines as payment for personal damages, a legal move which was unsuccessful (p.1.http://www.men.gr/58/onasis/index8.htm), while soon after, Donald McCasker didn’t speak publicly about this whole affair “…and “disappeared from the face of the earth” just after the accident. He returned to the U.S.A. and since then, he hasn’t shown any sign of life…The only sign of his presence was when he sent a memorandum of apology to the greek magistrate court of Athens, where he denies all accusations concerning any “personal negligence” concerning the inspection of that airplane’s control gears…” (trans. from greek)(p.7.http://www.tovima.gr/default.asp?pid).

Because we still have to enumerate and describe many more technical details related to this airplane “accident” which killed Alexander Onassis, as well as data concerning “the concerted effort” by the “legal” and “certified” technical experts to distort “the real events” and “the real facts” through their “official findings”, we shall continue to unravel all these “horrid truths” involving this “horrid event”!!! 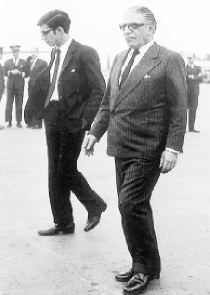 Aristotle Onassis – an ideal type of a modern “Neanderthal” – Epilogue (b)

Aristotle Onassis-the ideal type of a modern “Neanderthal” (Part B)

Aristotle Onassis – an ideal type of a modern “Neanderthal” (Part A )

Aristotle Onassis – an ideal type of a modern “Neanderthal” – Epilogue (a)